The Dispute Resolution clause is one of the key clauses in a contract and typically a point of protracted negotiations particularly in complex contracts. Contracts in the construction industry are no different. To streamline negotiations between potential parties to a construction contract, various industry specific organisations prescribe standard form contracts. One of those contracts is the Agreement and Conditions of Contract for Building Works of 1999 (the ‘Joint Building Council’ (JBC) ‘1999’) published by the Joint Building Council of Kenya in 1999 (The Green Book).

To ensure relevance with the prevailing economic and social conditions as well as compliance with the highest standards, the Architectural Association of Kenya (AAK) is spearheading the process of amending the 1999 Green Book. The Dispute Resolution Clause is one of the clauses up for review and we look at how the Green Book amendments compare to other comparable contracts.

Clause 45 of this Green Book provides for the settlement of disputes as illustrated in chart 1. 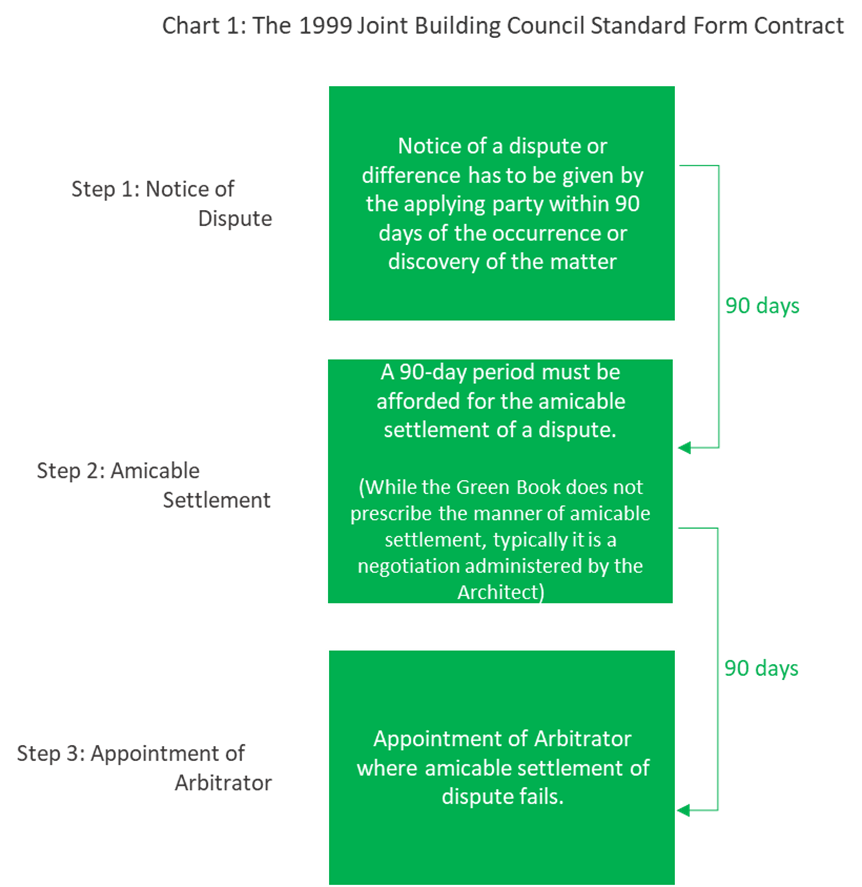 The Joint Building Construction Council (JBCC) (formerly the ‘JBC’) has proposed to amend the Green Book to include additional alternative dispute resolution mechanisms (‘ADR mechanisms’) prior to the submission of a dispute to arbitration.

One of the proposed ADR mechanisms, adjudication shall operate similar to the DAAB under the Red Book as illustrated in chart 2. 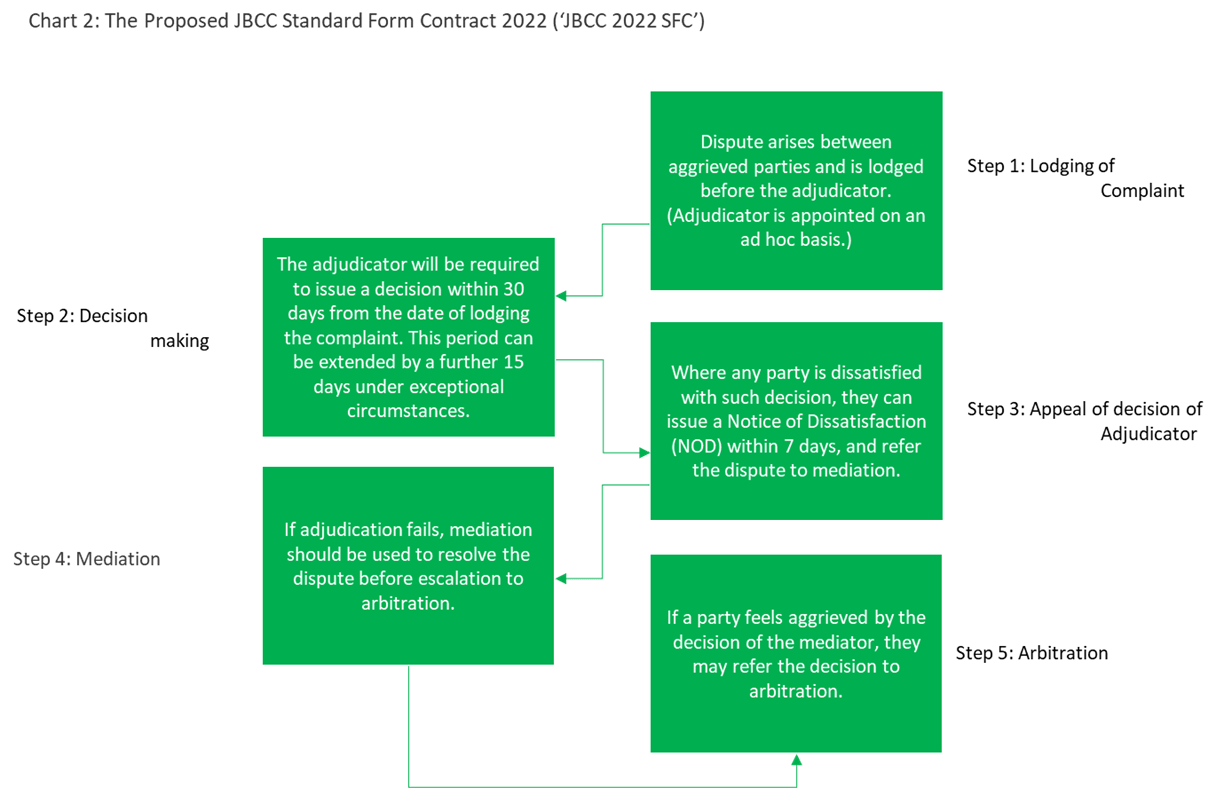 The adjudicator is appointed on an ad hoc basis as it was considered that a standing board may not be required given the scale and length of many projects ordinarily governed by the JBCC. This is in contrast with the Red Book where a standing DAAB is established at the outset of the contract. This recognises local practice where the Red Book, when used locally, is usually amended to provide for appointment of the DAAB on an ad hoc basis. The Green Book anticipates that the adjudicator’s appointing body would be set out in the Contract data. Suggested appointing bodies included the Chartered Institute of Arbitrators, Kenya, the Institute of Engineers of Kenya, the Institute of Chartered Project Managers etc.

There are various benefits to these pre-arbitral steps. Like in the Red Book, the JBCC 2022 provides for mandatory pre-arbitral steps with an aim of giving parties an opportunity to resolve disputes relatively quickly and inexpensively, with the possibility that they may avoid arbitration altogether.

As at the date of this newsletter, the JBCC 2022 SFC is still under review by AAK and is yet to be released to the public.

The 2017 FIDIC Conditions of Contract for Construction

There are number of comparable standard form contracts across various jurisdictions, we will compare the JBCC 2022 with the second edition of the FIDIC Conditions of Contract for Construction 2017 (the ‘Red Book’). The Red Book is published by The International Federation of Consulting Engineers (FIDIC). It is widely used for international contracts and in Kenya for local contracts it is the preferred route where the value of the contract is at least USD 10,000,000. While FIDIC publishes different forms of contracts for various project types, the Red Book provides the best benchmark as it envisages the traditional form of contract also envisaged by the Green Book i.e. where the Employer has been responsible for the bulk of the design work.

Clause 21 of the Red Book provides for a multi-step dispute resolution procedure comprising of the Dispute Avoidance/Adjudication Board (DAAB), amicable settlement and arbitration as illustrated in chart 3. 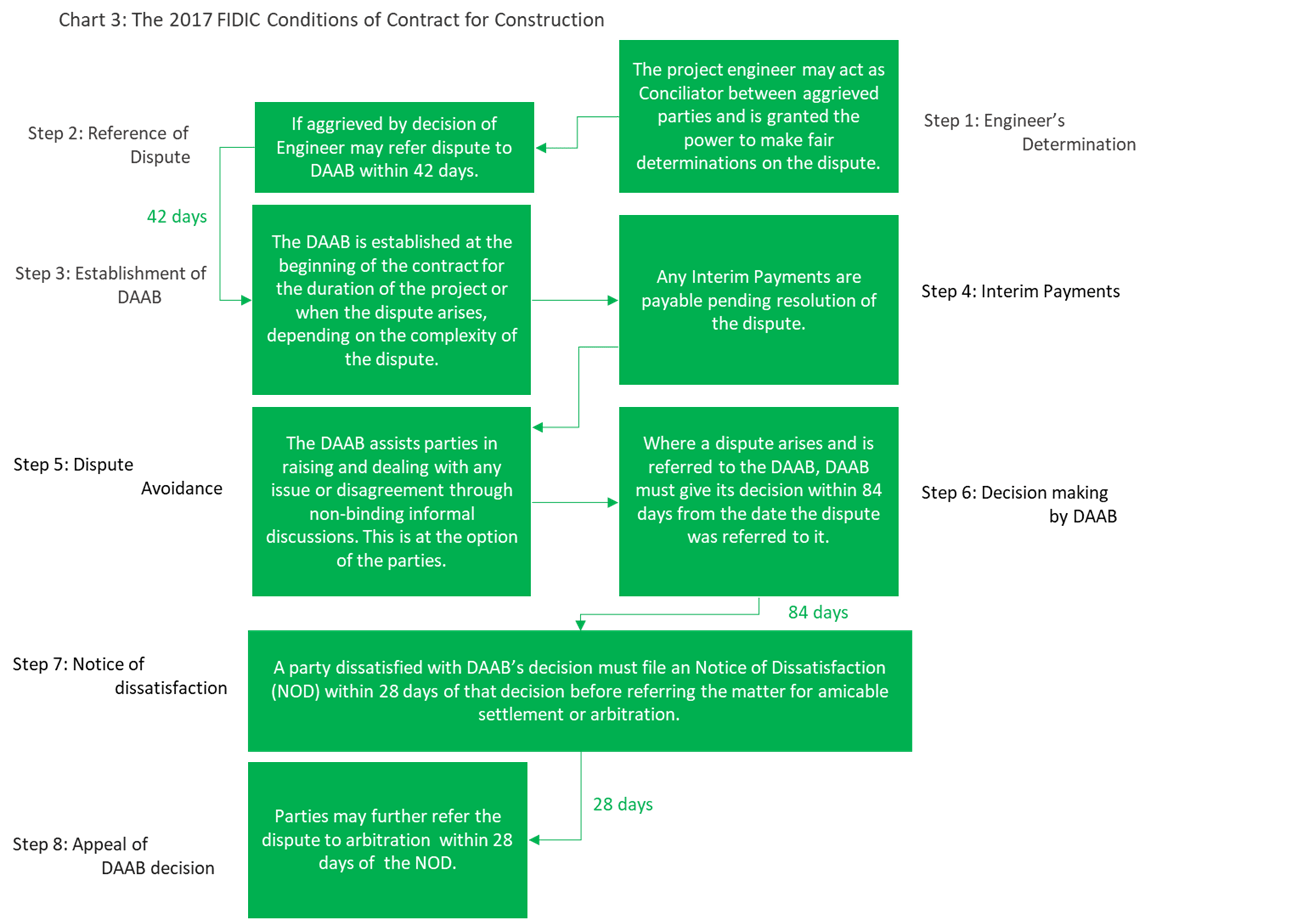 The DAAB was designed to provide expedited dispute resolution as a means of avoiding protracted litigation that may otherwise stall major construction projects. It comprises of either one suitably qualified member or three suitably qualified members. The qualification standards are not set out in the Red Book.  The Red Book provides that where there is no DAAB in place by reason of either non-appointment or expiry of appointment, the pre-arbitral steps do not apply and one may proceed directly to arbitration.

Below is a comparative analysis between the JBC/JBCC standard form contracts and the FIDIC Red Book include the following:

With referral of disputes to arbitration trending upward, there has been a need to further streamline ADR mechanisms in the construction sector.

There is increased focus on dispute avoidance as opposed to dispute resolution. Dispute avoidance is designed to avoid the dispute altogether. This means that high costs for arbitration or litigation can be avoided entirely. The parties therefore focus on resolving the potential dispute mutually among themselves with the assistance of a neutral party rather than using an independent arbiter which typically leads to a winner take all situation.

Furthermore, the finality of arbitral awards was one of the key reasons why arbitration was the preferred route, while the Kenyan Supreme Court affirmed the need for finality in arbitral disputes and generally all disputes [see link]. Recent trends indicate that parties using various legal tactics may lengthen the dispute resolution process past what the parties intended in contract.

It is the right time for the transition from the Green Book to JBCC, 2022 taking into account the lessons learnt over the last 23 years.  A 2020 analysis by HKA, a risk mitigation and dispute resolution consultancy, found that across 1,185 construction projects the cumulative value of sums in dispute exceeds USD 48.6 billion. The analysis also found that the average claim accounted for more than half of the planned capital costs. This necessitates more proactive approaches in the prevention and the timely settlement of disputes. The use of pre-arbitral steps is a step in the right direction and would enhance the use of JBCC locally. While the hope is that JBCC 2022 will have more local uptake, challenges still remain considering that most local projects are undertaken by foreign contractors who would prefer SFCs like the Red Book that they are more familiar with. A first step to more wide spread use of the JBCC is to lobby the government to adopt it for public procurement of building works with a similar profile i.e. where the design is prescribed by the public procuring entity. This widespread use will then eliminate the inefficiencies and losses associated with having to interpret the many varied approaches used to establish the risks, liabilities and obligations of the parties together with the administration procedures of the contract. This lends itself to certainty of contract, a win for the parties to contract and the building industry in general.

This briefing is a highlight of legislative and policy changes and is intended to be of general use only. It is not intended to create an advocate-client relationship between the sender and the receiver. It does not constitute legal advice or a legal opinion. You should not act or rely on any information contained in this legal update without first seeking the advice of an advocate.

KN Law LLP is a boutique corporate and commercial law firm operating in Nairobi and London.